A4 residents, cyclists and pedestrians most exposed to toxic air in Brentford.

Results for the air quality monitors installed this summer by the Hounslow Green Party show that levels of Nitrogen dioxide (NO2) in Brentford were dangerously above EU limits, particularly along the A4. The measurements were made between the last week of school and the first three weeks of the summer holidays when traffic is generally lighter across London, so a lower average was expected. 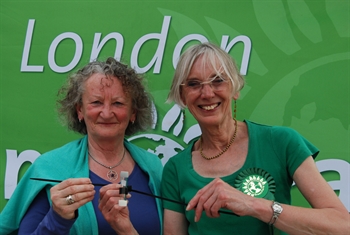 The A4 consists of six lanes of traffic plus the four elevated lanes of the M4. There are cycling and pedestrian paths and the road is surrounded by houses, schools and businesses. The monitors were installed at key traffic junctions at the A4 and broader geographical area to map pollution measurements. Brentford NO2 levels were similar to other areas of London measured by communities supported by Mapping for Change.

We are aware air monitoring is costly for taxpayers and London councils and only serves to confirm what we already know: emissions are too high. Add to this EU fines, NHS costs and 9,400 deaths related to air pollution and we can only conclude air pollution is not a distant threat and we need to clean-up our air today.

The monthly average measurement for Brentford's 36 monitors was 49.07 µg/m3 (micrograms per cubic meter), well above the EU maximum limit of 40 µg/m3. Monitors giving readings nearly twice this limit were located at the intersections between the A4 and Ealing Road, outside the University of West London halls of residence, and the point where the M4 forks away from the A4.

The results were presented by Louise Francis, Chief Executive of Mapping for Change, the organisation behind the monitoring, at the Chorley Institute of University College London. “NO2 is a noxious substance and has been associated to a number cardiovascular diseases” Francis said. She added: “Research suggests that different driver behaviours, such as braking and acceleration can influence local air quality. In 20 mph speed zones  brake and tyre wear, which contributes to particulate pollution, is significantly reduced”.

Hounslow Green Party is supporting the introduction of a 20 mph limit in Hounslow to improve road safety and air quality; similarly we oppose developments in parks and green-field sites as well as any airport expansion. The London Green Party supports the phasing-out of diesel vehicles and improved testing standards for automobiles.

Hounslow residents can view the results on the Community Maps page.