Hounslow Green Party demonstrated against Heathrow expansion on Friday 22 February 2019 outside the Holiday Inn in Brentford.  The demonstration was timed to coincide with Heathrow’s exhibition, in conjunction with their latest consultation “Heathrow Airspace and Future Operations”. 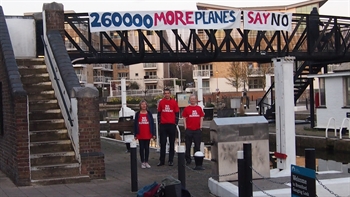 A banner saying “260,000 MORE PLANES, SAY NO” was attached to the canal bridge outside the exhibition, where it could be seen from inside.  Green Party activists joined members of Friends of the Earth, Brentford and Hounslow Stop Heathrow Expansion (BASH) and other concerned citizens to give extra information to visitors outside the hotel.

The Green Party is strongly opposed to the expansion of Heathrow Airport and the proposed additional 260,000 flights annually that this would deliver.  There are no precise flight paths and comparative maps for existing aircraft operations so the impact of the proposals on people living in Hounslow is not clear.

We are also opposed to the introduction of an extra 25,000 flights per year hidden in page 13 of one of the consultation documents, which Heathrow is proposing to introduce in advance of a Third runway. 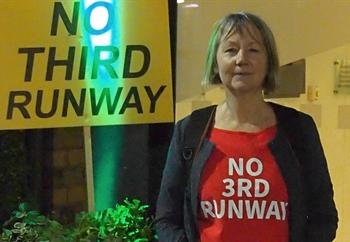 Victoria George, Green Party representative for Brentford said “Once again Heathrow Airports Limited has given us nothing more than a glossy Public Relations exercise.  I was saddened and frustrated by just how many members of the public told me how worried they are. People are just so fed up – they already feel they suffer too much aircraft noise and can’t believe the government are prepared to inflict yet more on them.

All the options Heathrow give for airspace arrangements just confuse people and play one community off against another. What is clear though, is that a third runway would create even more unacceptable noise,  air pollution, and traffic congestion And the urgent need to be taking action on climate change seems to be put aside when it comes to aviation.  Our party stands firm in its belief that we need to shrink the aviation industry not grow it”.

Here is the flyer we handed out 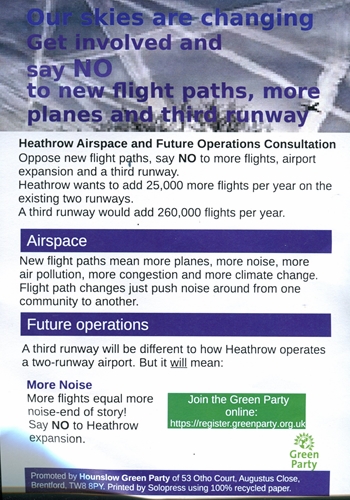