Activists from Hounslow Green Party joined other “Stop 700 More” protestors outside the Royal Courts of Justice in London on Monday 11 March 2019. 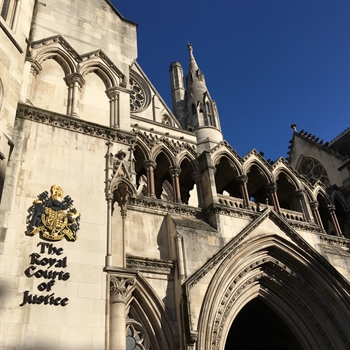 Grounds for the legal challenge include that the expansion at Heathrow has been approved without properly considering its impact on Climate Change, and also that the extra emissions from the 700 extra flights are inconsistent with the Paris Agreement, which the Government has ratified.

Victoria George, Green Party representative for Brentford and part of the protest said “if you strip away the legal jargon the case is very simple.  Chris Grayling, the Secretary of State for Transport, is charged with hypocrisy.  The government signed the Paris Agreement and now he is ignoring it.  And because we live by the Rule of Law there are rightfully consequences for his reckless action.  The Third Runway is not a certainty, and this court case, and this brilliant turnout today are testament to that. I am, of course, disappointed that Hounslow Council is notable by its absence. It should be here, standing up for the health, well-being and future of its citizens.” 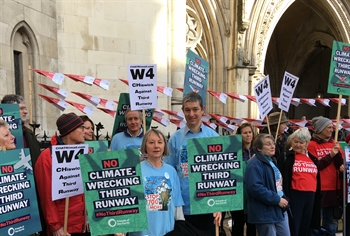 Tim Crosland, Director of Plan B, one of the organisations taking the government to court, sent a message to be read out at the recent BASH meeting at the Nishkam School in Osterley:

"We're very clear about this: if the court agrees with us that the Secretary of State's [Chris Grayling] designation of the Airports National Policy Statement was illegal he needs to rip it up and start again!  If there's one thing that unites all humanity and the rest of the biosphere it's the determination to survive and to pass on the flame of life undimmed. Compliance with the Paris Agreement temperature limit is, according to the best available science, vital to that common concern. The Secretary of State's position that the Paris Agreement is "irrelevant" to Heathrow Expansion is extraordinary and irresponsible. If his plans proceed it will be impossible for the UK to reduce its emissions in line with the Paris limit of 1.5˚C and "well below" 2˚C.  This sort of litigation will always be difficult but we must hope that the court agrees. Thanks so much for all of your support. Best wishes, and hope to see you in court!"