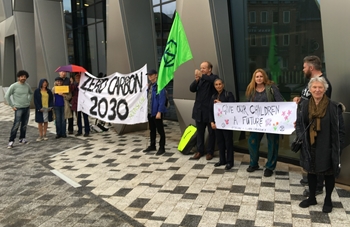 Hounslow Green Party presented the Hounslow Climate Change petition at the Borough Council meeting on the evening of 18 June 2019, accompanied by Extinction Rebellions (XR) representatives, Friends of the Earth and other concerned citizens.

Tony Firkins, Hounslow Green Party co-ordinator and Secretary of the Green Party Energy Policy Working Group, made a four minute speech  (see below) in which he explained why it is so important for Hounslow Council to play its part in addressing climate change.  Tony called for immediate and radical action rather than warm words to address the Climate Change Emergency.  He asked that the council follows Parliament, the London Assembly, Haringey, Lambeth, Lewisham, Newham, Southwark and neighbouring Ealing, and set a target to be carbon neutral by 2030

In a rousing speech, he asked the council for a plan setting out targeted reductions in CO2 emissions in tonnes and to identify the expenditure to make the rapid reductions needed.  Housing, workplaces, transport and energy should all be addressed in detail.  He demanded that this plan is available to the public by the end of the year. 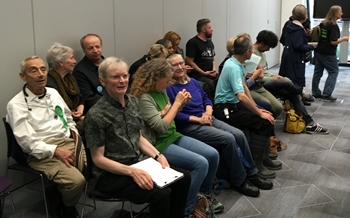 Later in the evening, Labour Councillor Katherine Dunne presented a motion which proposed to “join with other local authorities, the Mayor of London and the UK Parliament in declaring a  ‘Climate Emergency’ that requires urgent action”.  The motion also agreed to “commit to reviewing the existing arrangements in place to reduce the council’s carbon footprint and will identify measures towards a goal of making the council’s activities carbon neutral and ultimately zero-carbon within the shortest achievable timeframe”.  The motion was passed unanimously, to the considerable satisfaction of the Greens and others present.

Tony Firkins said “I welcome that the council have started taking Climate Change seriously.  Katherine indicated in the meeting that she aims to publish a detailed plan by the end of the year, and we are very happy to help draw up the plan. This is a hugely important decision for the Borough, for London and for the Country. At last we are taking the crisis seriously.”

The Green petition, which originally sparked the discussion, called on the Council “to review their current carbon reduction plans to establish the actions needed to be compatible with 1.5 degrees warming, given the national and world concerns about the climate emergency. Further we ask the council to call on government and the Mayor of London to give Hounslow Council the powers and funding to enable Hounslow Council to become carbon neutral by 2030.”

Good evening Mayor, Councillors, and thank you for inviting me to speak about this petition. I’m Tony Firkins, local resident and member of the Hounslow Green Party.  Our petition asks Hounslow Council to raise the profile of the climate emergency within the Borough. We agree with David Attenborough when he states that Climate Change is “our greatest threat in thousands of years”.

“We the undersigned petition Hounslow Council to review the council’s current carbon reduction plans to establish the actions needed to be compatible with 1.5 degrees warming, given the national and world concerns about the climate emergency. Further we ask the council to call on government and the Mayor of London to give Hounslow Council the powers and funding to enable it to become carbon neutral by 2030. “

“The IPCC’s Special Report on Global Warming of 1.5°C describes the enormous harm that a 2°C rise is likely to cause compared with a 1.5°C rise, and confirms that limiting Global Warming to 1.5°C may still be possible with ambitious action from national and sub-national authorities and others.”

Since we raised this petition Parliament has passed a resolution declaring a Climate Change emergency, as have the London Assembly and many London boroughs. We welcome Councillor Dunne’s motion later in tonight’s agenda calling on this council to do the same. The motion suggests Hounslow should commit to being carbon neutral within the shortest achievable time frame.  We believe that time frame should be 2030 or before.  The London Assembly, Haringey, Lambeth, Lewisham, Newham, Southwark and neighbouring Ealing have all set targets to be carbon neutral by 2030.

So why are we pressing for carbon neutrality by 2030? The Paris Climate Change agreement has two main principles. These are to set temperature targets and to achieve equity.  The priority is to keep the risk of the world heating over 2C to an absolute minimum. Setting out on a plan which allows a 33% chance of 2c, or a 10% chance or even a 1% chance is sheer madness.

And so, if we are to be realistic and if we are to be fair, carbon neutral by 2030 must be our target.  We cannot afford to wait for this government to see the sense of this.  2050 COULD WELL BE TOO LATE, AND IT IS A ‘TOO LATE’ THAT WE CANNOT RISK.

We ask that this council writes an action plan that is available to the public by the end of the year.  There are already some good examples within London. The Mayor’s “Zero Carbon London” and Haringey’s “Zero Carbon Haringey” both cover the areas that need to be addressed. Not just in warm words but in actual measurable tonnes of CO2.  Housing, workplaces, transport and energy are all addressed in detail.  The Hounslow plan must cover all greenhouse gas emissions within the borough, and not just those directly produced by the council.  Addressing just the council’s own emissions would be totally inadequate.

We recognize that the council will require extra funding and powers to address the climate emergency and our petition asks you to campaign for this alongside other boroughs.

Climate change is happening, and it is progressing at an alarming rate. We all know this, and we know we must not stand by. Please act on this petition.